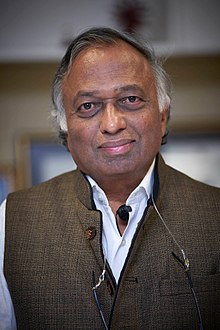 Shri Vijay Pandurang Bhatkar is an computer scientist, IT leader and educationalist. He is best known as the architect of India's national initiative in supercomputing where he led the development of Param supercomputers. He is a Padma Bhushan, Padma Shri and Maharashtra Bhushan awardee. Indian computer magazine Dataquest placed him among the pioneers of India's IT industry. He was the founder executive director of Centre for Development of Advanced Computing (C-DAC) and is currently working on developing exascale supercomputing for India.

Thinker and thought leader, researcher and innovator, scientist and philosopher, educator and educationist, author and articulator, policy architect and institution builder,
Dr. Vijay Bhatkar is one of the internationally acknowledged scientist and IT leaders of India.

Bhatkar has been chancellor of Nalanda University, India since January 2017. Prior to that, he served as the Chairman of Board of Governors of IIT Delhi from 2012 to 2017. Currently he is serving as the Chairman of Vijnana Bharati, a non profit organization of Indian scientists.

GCCI is glad to welcome Shri Vijay Bhatkar and looking forward to his guidance.