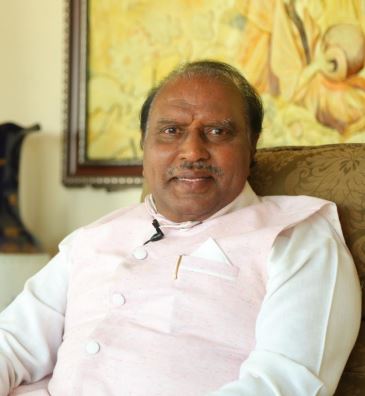 Dr. G.B.K. Rao, an Engineer-turned-Environmentalist, is the Architect of Pragati Biodiversity Knowledge Park and the Founder Chairman of Pragati Group, Chairman Expert Committee on Agriculture and Food Processing for Southern Region, Indian Chamber of Commerce and Chairman Tourism, hospitality, Media & Entertainment (MICE) Committee, The Federation of Telangana Chambers of Commerce and Industry.He was born in an agricultural family at Repalle, Guntur District, Andhra Pradesh. This provided him knowledge of traditional farming. His early education at Vyasashram near Kalahasti provided with an early reinforcement of Indian culture, devotion, meditation and Vedic approach to knowledge.

After obtaining his Engineering Degree from Osmania University and he began his entrepreneurial stint. He started MECH FAB Engineering works (1980) at Pimpri near Pune, with first of its kind technology approved by international agencies viz. BAX COUNSEL, PDIL, LLYODS, Nagpur Explosives, Bureau Veritas India etc in the efficiency and operation and product standard.

In 1991, he established a Cobalt-Vanadium base high-speed steel plant Powmex Steels Ltd. at Titlagar, Orissa. With the setting up of this company, Dr. G.B.K. Rao could start exporting; apart from domestic consumption of what was once a heavily import oriented product.

During those days, he adopted 15 villages and imparted education, skill development to Rural youth in the areas of growing vegetables; modern agriculture methods, household industries etc thereby their living standards have been improved drastically. Then Chief Minister of Orissa SriBijuPatnaik appointed Dr. G.B.K. Rao as Advisor to Government of Orissa for the skill development of the rural youth.

Dr G.B.K Rao is a man who changes the impossible to possible. Influenced by his rural childhood and Vedic schooling Dr. G.B.K. Rao used to think about the concept of Healthy, Happy and Joyful Living. He thought of the deteriorating Indian heritage, culture and the roots of Vedic way of living and the two potential threats for the living being on this Earth i.e., Hunger and Pollution. The answer for these two threats only Tree and Cow i.e., “VrukshorakshatiRakshitaha” and “GowSamrakshana.”

For thousands of years India has espoused the precious secret to health and healing. Significantly, the nucleus of an organisation was born in 1994, consumed by passion to ensure India‟s medical heritage must take its rightful place as one of the world‟s greatest healing system. Dr G.B.K Rao‟sPragati ushers the “VyadiRahitaSamajam” by harnessing the health giving and healing power of plants.The inordinate linkage between BharatiyaSamskriti and Sacred vanamoolikalu is established by Dr G.B.K Rao at Pragati Biodiversity Knowledge Park

Pragati has taken a gigantic task of identifying rare sacred herbal and medicinal plants. The valuable heritage plant treasure is planted in groups of specific importance. These PavitraVrikshalu (sacred vanams) such as NavagrahaVanam, NakshatraVanam, RasiVanam, PanchbhootaVanam, ParijataVanam, KadambaVanam, SugandhaVanam, Ganapathi 21 PatrikaVanametc are planted here to get the desired impact as enshrined in our Vedas. The aroma released by these plants cleanses the body of toxins and helps in creation of spaces free of bad bacteria, virus and mosquitoes

Dr G.B.K Rao is now an authority on all matters relating to India‟s environment, biodiversity, vedic living & rishi samskriti, natural farming, sacred vanams, bio-pharma, reduce-reuserecycle, yoga & meditation, naturopathy and spa, gardening & landscaping, and creation of mosquito-free spaces through promotion of medicinal, herbal and mosquito repellent plants. The CMs of two Telugu states recognized Dr G.B.K Rao‟ Pragati as a role model to follow. Shri K ChandrashekharRao, Hon‟ble Chief Minister of Telangana asking people as to „ Why not we repeat Pragati‟ in Hyderabad and across the state.Dr G.B.K Rao's work at Pragatihas been recognised through more than 300 State, National and International awards.

On 28th October 2018, on the occasion of 25th Year Celebrations of Pragati Group, Dr G.B.K Rao launched AmruthaAhaaram Package. Registered members of this Package are provided shared accommodation, millets &kashaayaalu diet, yoga, meditation, nature walk, therapy and much more at Pragati Resorts. Dr SaralaKhadarVali, daughter of Dr KhadarVali will personally guide and mentor the Package members on healthy living and healthy diet. Every month-end to the first week of next month, there will be a new batch of AmruthaAhaaram Package.

Dr G.B.K Rao‟ creation “Pragati” is an unparalleled treasure of sacred herbal medicinal and aromatic plants. Pragati‟s uniqueness is in bringing to one place all Vanamoolikas (herbal plants) to further research, and protecting them from extinction. It is this fact that has endeared Dr KhadarVali to Dr G.B.K Rao and Pragati. The pollution-free, oxygen and aroma rich environs of Pragati Resorts, with more than 40, 00,000 trees, and an array of local and exotic fauna frequenting the place can find very few parallels across the world.

Recently, Dr G.B.K Rao reflecting on RBI‟s bank rate cut views, “Rate cut is welcome. If we analyse the root cause for ills plaguing the economy, it is the environment. At least 2% of GDP should be spent for preserving environments for getting all aspects of economy in line.”

Recently Dr. Rao launched the Amrutha Ahaaram program to create awareness in the public, to avoid eating rice and wheat, and start eating millets, the food of the future.

Dr. Rao’s Pragati Resorts has won over 300 State, National and International awards, including the highest recognition called Oscars of Global Business. His efforts are also recognised by the United Nations. He is the board member of Asian PGPR Society and sponsor of its national and international conferences. Recently on 19th August’2019 , he had a successful talk and presentation at 6th Asian PGPR International Conference on Sustainable Agriculture at Tashkent, Uzbekistan.